Find In Stock 9mm Handgun Ammo From Various Retailers. Deals on 9mm Ammo that is in stock at the lowest prices. 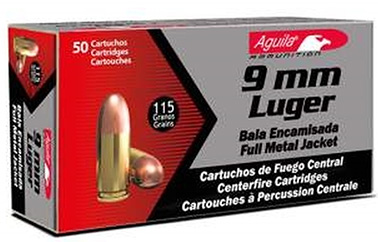 9mm ammo also known as 9mm Luger and 9×19mm Parabellum is one of the most widely used handgun ammo in the world. The round is an ideal choice for a range of shooters. The role of 9mm Luger bullets started in World War I and its continued popularity today testifies to its capabilities as an efficient and effective cartridge. According to the 2014 edition of Cartridges of the World, the 9×19mm Parabellum is the world's most popular and widely used military handgun cartridge.

Georg Johann Luger designed the 9x19mm in 1902, adapting it from the 7.65x21mm Parabellum which he also designed slightly earlier. Luger presented the ammo to the British Small Arms Committee in 1902 and three prototypes to the US Army in 1903 for testing. By 1904 the German Navy officially adopted the cartridge followed by the German Army in 1906. As time passed, its use grew to encompass not only the armed forces, but police agencies and civilian self-defense as well.

To know more about the history of  9mm ammo, service history, production history, specifications, and ballistic information, please read more at the wiki.

The average cost for 9mm Ammo?
Bulk Cheap Ammo shows you the latest prices on 9mm ammo from various ammo retailers. Prices listed on our website are offered by retailers and can change anytime without any notice*.

Here at Bulk Cheap Ammo we have listed the top ammo retaliers. However, as of now, not all top retailers are listed on our website. We are continuously working to add as many retailers possible to get your more deals on a single page. With more than 60,000 google searches each month, 9mm ammo is known as a popular caliber. (Search Volume Source Ahrefs.com)

As per the recent Google search results, here is the list of top 8 online ammo retailers having great prices on 9mm ammo. Results may vary*

6. Ammo Board
Buy your 9mm ammunition in bulk here at Ammo Board. We offer a diverse range of affordably priced 9mm bulk ammo from top brands you trust.

7. Cheaper Than Dirt
9mm Luger is the nations most popular centerfire pistol caliber, and we have a ton of it! Get stocked up on 9x19 parabellum today at the best prices!

Bulk Cheap Ammo is an online ammo search engine where you can find competitive prices from various ammo retailers. We do not sell ammo. Our goal is to make ammo finding easy and time-saving.  We also have a listing of ammo deals from various retailers on the popular calibers like 9mm ammo, 223 Ammo,22lr ammo, 5.56 ammo,300 blackout ammo, 6.5 creedmoor ammo,308 ammo and many more. Compare ammo deals on ammo buying concepts like bulk ammo and cheap ammo.